State officials revised the storm’s death toll days after Nicole made landfall as a Category 1 hurricane in Vero Beach, adding one in Duval County.

The Florida Medical Examiners Commission is staffed by the Florida Department of Law Enforcement, which also informs the public about deaths.

Five fatalities have been linked to Nicole, according to the FDLE, and five have been confirmed by the MEC: four in Orange County and one in Duval County.

According to the Orange County Sheriff’s Office, two people in the Orlando region died from electrocution after touching downed power wires.

Although the specifics of the Duval County fatality have not been made public, News4JAX is trying to find out more.

On Thursday, Hurricane Nicole caused homes in Florida to fall into the Atlantic Ocean and put a row of high-rise condominiums in jeopardy in areas where Hurricane Ian had just weeks earlier washed away the beach and demolished seawalls.

It was only the third hurricane on record to make landfall in Florida in November and the first in 37 years. Only a few weeks after Ian reached the Gulf Coast, it struck again, killing more than 130 people and destroying thousands of homes.

Although Nicole’s winds subsided after it made landfall as a Category 1 hurricane near Vero Beach at around 3 a.m. on Thursday, its storm surge slammed into the shoreline in the nearby barrier island communities of Wilbur-by-the-Sea and Daytona Beach Shores, causing some homes to crash into the water.

Northeast of Orlando, in Volusia County, officials announced Thursday night that 24 hotels and condos in Daytona Beach Shores and New Smyrna Beach had been deemed hazardous and their evacuation had been ordered.

Building inspectors in Wilbur-by-the-Sea found at least 25 single-family homes to be structurally hazardous; these residences were also evacuated, according to county officials. “Our coastline has sustained unparalleled structural devastation.

In a news conference yesterday, county manager George Recktenwald said, “We’ve never experienced anything like this before. We don’t know when it will be safe for evacuated citizens to return home. 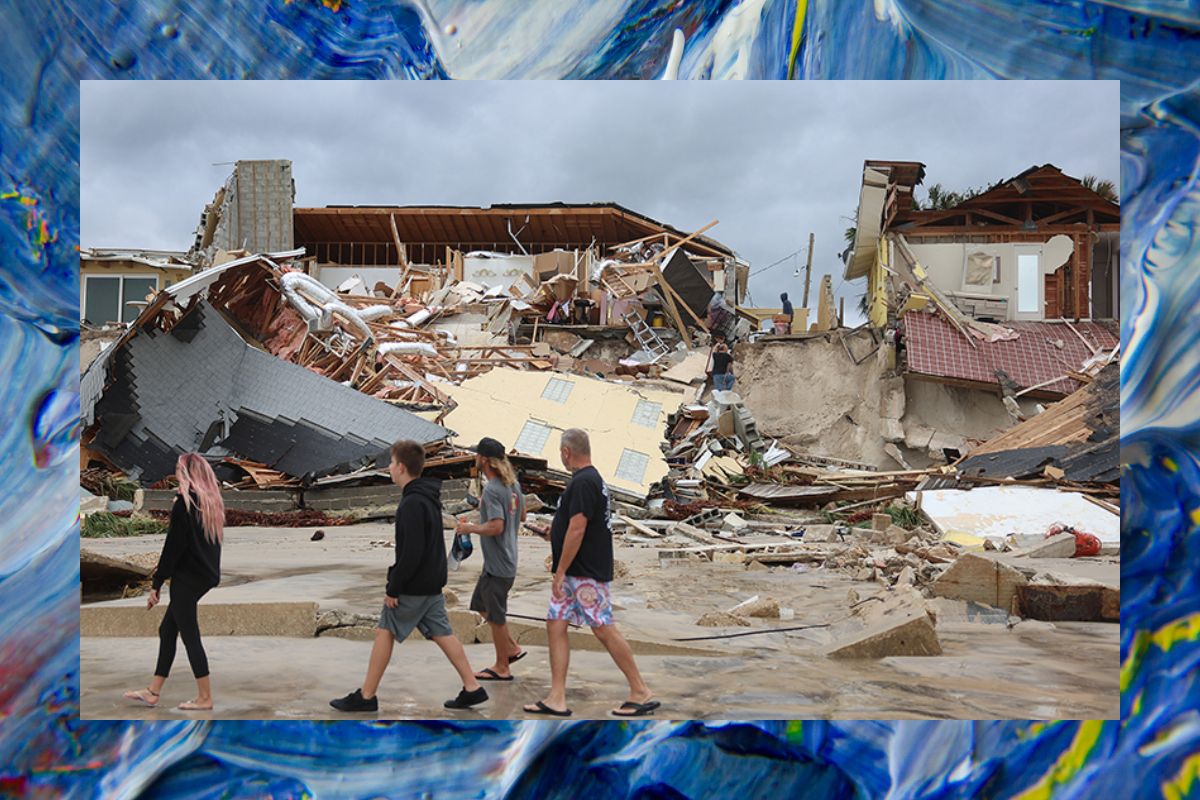 The initial damage estimate for Nicole’s wrath in Volusia County, according to the Volusia County Property Appraiser, is over $481 million, surpassing the $377 million milestone set by Hurricane Ian, according to News4JAX’s sister station WKMG in Orlando.

Mike Chitwood, the county’s sheriff, wrote on social media that many beachfront homes in Wilbur-by-the-Sea had collapsed and that many more were in “imminent jeopardy.” He claimed that a curfew was in place and that most bridges leading to the beachfront homes had been closed to all but essential employees.

As director of sales and marketing for Salty Dog Vacations, Krista Dowling Goodrich oversees 130 vacation rentals in Wilbur-By-The-Sea and Daytona Beach Shores and saw backyards collapse into the sea shortly before the storm.

About seven brightly coloured homes along Highway A1A have lost their backs in the aftermath. Water lapped beneath the foundations of one modern home, leaving two bedrooms and a sizable portion of the living room vacant. Decorations on a partially collapsed wall read “Blessed” and “Grateful.” When Goodrich saw it, she started crying.

We were able to collect our family photos yesterday, despite the fact that half of the house was destroyed, Goodrich said. “When you see this, it is overpowering. These people worked hard to get where they are in life, and now they are completely destroyed.

Officials in Daytona Beach Shores judged numerous multistory buildings hazardous and went door to door advising residents to gather their belongings and evacuate after oceanfront bathrooms connected to the city’s Beach Safety Ocean Rescue building collapsed. The tall high-rises were these. Because it wasn’t safe, they had to violently eject those who refused to go, according to Goodrich.

According to Connie Hale Gellner, whose family owns a property there, the homeowners association at the Marbella condos in Daytona Beach Shores had recently paid $240,000 to temporarily reconstruct the seawall Ian devastated in September. The seawall was being washed away by Nicole’s storm surge, as seen on live video from the building’s cameras.

We were aware that it was only intended to control erosion and not to halt a hurricane, according to Gellner. The pool deck of the building, however, is “essentially in the ocean” after Nicole, according to Gellner. “The issue is that there is no longer a beach here. Therefore, even if we wanted to rebuild, they would definitely condemn the structure because of the water simply splashing on it.

Before Thursday’s dawn, Nicole had spread out, engulfing almost the whole, weather-beaten state of Florida in addition to Georgia and the Carolinas. As Nicole headed northward over central Florida, some areas experienced tropical storm-force winds as far as 450 miles from the centre.

Although Nicole’s winds caused little harm, its storm surge was more damaging than it could have been in the past because of the rising seas brought on by climate change, according to climate scientist Michael Oppenheimer of Princeton University. According to him, this results in greater coastal flooding that flows deeper inland, making what were formerly once-in-a-century events virtually yearly in some places.

It undoubtedly fits into the overall picture that is developing, according to Oppenheimer. “It will take place somewhere else. The entire planet will experience it. As parts of the St. Johns River were at or above flood stage and some rivers in the Tampa Bay area were also approaching flood levels, Nicole also produced flooding well inland, according to the National Weather Service.

Nicole touched down close to Vero Beach, but there was no substantial damage, according to officials. In Lauderdale-by-the-Sea, a portion of a fishing pier washed away, but the storm’s worst effects were felt farther to the north. By 1 p.m., Nicole was moving near Tallahassee with maximum sustained winds of 45 mph.

A state of emergency was declared in each of Florida’s 67 counties. Additionally, President Joe Biden authorised the Seminole Tribe of Florida’s emergency declaration, ordering government assistance for the tribal country. On six reservations spread out over the state, the Seminoles are numerous.

According to the sheriff’s office in Martin County, which is about 160 miles south of Volusia County, Nicole’s wind and waves uncovered the bone remains of six persons thought to be from a Native American burial place on a Hutchinson Island beach.

The sheriff’s office stated in a news release that “detectives are working diligently to preserve and carefully remove the remains that are exposed with the utmost care and respect.” The state Bureau of Archaeological Research will receive the remains before taking them to a medical examiner.

In Tallahassee on Thursday, Gov. Ron DeSantis announced that 15 shelters had opened along Florida’s east coast and that nearly 20 school districts had closed their doors.

Hurricane Ian, a Category 4 storm, ravaged portions of Florida. Ian caused severe harm throughout the state by destroying homes, destroying crops, especially orange groves, and sending a storm surge of up to 13 feet onshore. Many people are still struggling with the effects of this disaster.

Don’t forget to share this news with your loved ones and check out Lakecountyfloridanews.com