The crash of a utility task vehicle (UTV) with two people on board drew the attention of local emergency services, including fire engines, police cruisers, an air ambulance, and a CHP helicopter early this morning in the Indian Valley Reservoir, a popular off-roading destination near the Lake/Colusa County border.

It was determined that one patient had minor injuries, and the other refused medical attention despite doctors’ advice. 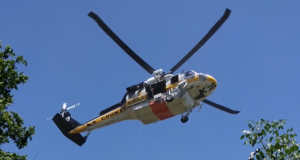 There were two helicopters, one from the California Highway Patrol and the other by Reach air ambulance, dispatched to the scene because of the remote location. Lake and Colusa County firefighters were also present.

The UTV (also known as a side-by-side) was reportedly still in a ditch at the end of the incident, and the patient’s family said they would remove the vehicle from the ditch.

A Facebook post from the CHP-Golden Gate Division Air Operations stated that their agency’s H-30 helicopter assisted and “transferred one of two patients to REACH.”

Despite flying 35 minutes to a call, “we are still the first to render aid at these remote calls,” the Facebook post stated.

Public Safety Scanner Lake County, CA’s transcription of scanner traffic during the incident allowed us to provide a high-level overview of what happened.