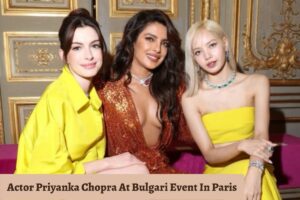 Priyanka Chopra Jonas recently attended an event in Paris hosted by the Italian jewelry brand Bulgari. The actress was among the celebs who attended the star-studded event, which also included Anne Hathaway, an Oscar winner, and Lisa, a K-pop superstar. Priyanka seemed to have a great time with Hathaway and Lisa at the event, and the three of them took a lot of pictures, which are now going viral on social media and among fan groups.

The Citadel actress wore a shimmering gown with a plunging neckline to the event. Bulgari’s spectacular neckpiece with a purple stone etched in it completed her ensemble. Her hair was fashioned in waves, and she wore makeup that suited her overall image.

On top of her yellow dress, Hathaway wore long, shirt-style outerwear. Lisa wore a tube top and a slitted long skirt. Hathaway and Lisa were both lovely in their outfits. At the event, they even enjoyed some private moments together, with Priyanka joining them.

Priyanka Chopra has been filming her next series Citadel, directed by the Russo brothers of Avengers: Endgame fame. Richard Madden (Eternals, Game of Thrones) co-stars with Priyanka in the Amazon Prime Video multi-series franchise Citadel.

We guess this is what Eden looks like. Bvlgari belles Anne Hathaway, Priyanka Chopra, and Lisa Manoban gathered in Paris for the jeweller’s ‘Eden the Garden of Wonders’ presentation.#bvlgari #annehathaway #priyankachopra #lisamanoban pic.twitter.com/F61aHLHFhV

It’s All Coming Back to Me, in which she co-stars with Sam Heughan, is her forthcoming feature. On February 10, 2023, it will be released in theatres. The film, which was previously named Text for You, is based on Karoline Herfurth’s 2016 German film SMS fur Dich. Celine Dion, the pop star, will also star in the film as herself.

The actress’ breathtaking costume came from the shelves of the company Rasario, according to a fan page called Priyanka Closet, and it is accessible on the official website under the term ‘Women’s Draped Sequin Maxi Dress.’ Surprisingly, the outfit costs a hefty USD 2520, which is around Rs. 1,96,030.8 in Indian currency. Check it out below:

Priyanka Chopra steals our hearts with her everyday ensembles as well as her red carpet looks. On January 4, 2022, for example, Priyanka Chopra Jonas was sighted on the streets of Los Angeles in a comfy elegant ensemble that she looked classy in. She was dressed elegantly in a velvet sweatshirt with a tight hairstyle and a black mask. Her Gucci Stripe velvet sweater has elevated the casual day look to new heights. After doing some investigation, we discovered that Priyanka Chopra’s silky stylish hoodie cost a hefty 1026 pounds, which when converted to Indian currency is almost Rs. 1,02,835.

Matt Kaplan Net Worth: How Much He Actually Earns?