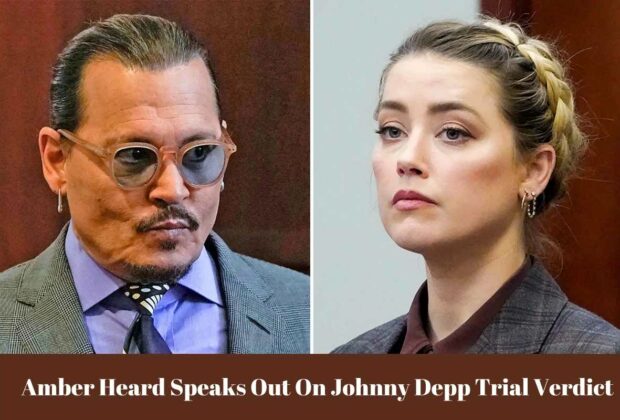 Depp sued Heard for $50 million in 2018 for an op-ed in which she referred to herself as a public face of domestic abuse but did not name Depp. After Depp’s lawyer dismissed her allegations as a hoax, Heard countersued for $100 million. “From the very beginning, the goal of bringing this case was to reveal the truth, regardless of the outcome,” Depp said in a statement following the decision.

I hope that my efforts to get the truth out have aided others in similar situations, whether men or women and that those who support them never give up.” Heard intends to appeal the ruling, according to her lawyer, Elaine Bredehoft. After the verdict in Johnny Depp’s trial, Amber Heard’s sister speaks out.

She goes on to say, “This was the most humiliating and horrible thing I’ve ever gone through.” “I’ve never felt further away from my humanity. I felt like I wasn’t quite human.” Guthrie pressed Heard on audio recordings in which she admits to hitting Depp and claims from the actor’s attorneys that she was acting in her testimony. “I’m confused how I could be both,” Heard responds, having listened to weeks of testimony insulating that she was a terrible actress.

She also claims she was retaliating for Depp’s abuse in many of the audio tapes, and that they didn’t tell the whole story. “I responded to (physical violence), and it becomes normal when you live in a violent environment.”

“When your life is on the line, not only will you take the blame for things you should take the blame for,” Heard explains, “but when you’re in an abusive dynamic psychologically, emotionally, and physically, you don’t have the resources, that say you or I do, to say, ‘Hey, this is black and white,’ because it’s anything but when you’re living in it.”

“We were jerks to one another. I’ve made numerous errors, but I’ve always told the truth “she explains. In the aftermath of his court victory over Amber Heard, Johnny Depp joins TikTok, thanking his “treasured” followers. Due to all of Depp’s supporters online and at the trial, Heard admits she wasn’t confident going into the verdict reading.

“I don’t give a damn what other people think of me or what conclusions you draw about what happened in the privacy of my own home, in my marriage, behind closed doors. I don’t think the typical individual is aware of those facts. And so I don’t take it personally,” she says, adding, “But even if you believe I’m deserving of all this hate and hostility, even if you believe I’m lying, you couldn’t look me in the eye and tell me you think there’s been a fair depiction on social media.” You can’t tell me you think this is a fair situation.”

“I think even the most well-intentioned jury… It would have been difficult to avoid this,” Heard continues. The actress also claimed that Depp’s numerous fans in the courtroom were a distraction. “His lawyers did a much better job of diverting the jury’s attention away from the essential concerns.”

After “Johnny Depp’s legal team saturated the media for days after the verdict with multiple comments and interviews on television, and Depp himself did the same on social media,” a spokesman for Heard told USA TODAY that the actress chose to sit down with Guthrie.

“Ms. Heard simply wanted to respond to what they did aggressively last week,” the spokesperson says, “and she did so by expressing her thoughts and feelings, much of which she was not allowed to do on the witness stand.” On Wednesday, Depp’s lawyers, Camille Vasquez and Benjamin Chew appeared on “Today” and “Good Morning America” to discuss the trial’s outcome.

Vasquez spoke about Depp’s loss in a libel case that took place in a London courtroom in the summer of 2020. He had sued The Sun tabloid’s publisher for defaming him by calling him a “wife abuser” without including the word “accused.” Heard was the star witness for the tabloid.

The attorney explained that the difference in judgment in the Virginia trial stemmed from the fact that the London trial follows a “different methodology.” “We feel the jury got it right because the overwhelming evidence shown in this case in Virginia much outweighed what was presented in the United Kingdom,” she said.

On “Today,” Heard responded by saying that the U.K. trial permitted her to admit “much more evidence.” She continues, “My evidence was, in fact, generally ignored. The most crucial pieces of evidence were left out. It was handled differently, with a judge rather than a jury.”

Despite being told not to look at the case outside of the courtroom, Depp’s lawyer, Chew, refuted the claim that online talk impacted jurors. “In my opinion, social media had no role at all,” he stated on “GMA.” “I don’t think there’s any cause to assume the jurors breached their oath,” he said on “Today,” adding that hearing Heard’s attorney Elaine Bredehoft make that argument was “disappointing.”

The conviction, according to Heard’s legal counsel and supporters, is a setback for the #MeToo movement and prevents women from coming forward with sexual assault charges. Heard expressed her disappointment and “heartbreak” over the decision in a statement to USA TODAY.

I’m even more dissatisfied with the implications of this decision for other women. It’s a setback, to be sure “she stated “It turns the clock back to a time when a woman who spoke out and spoke out might be publicly humiliated and shamed. It undermines the notion that women’s violence should be taken seriously.”