A safety hazard has been identified at the windmill at Brownwood Paddock Square and must be demolished before Hurricane Season can begin.

The decorative windmill and water tower in the square have both succumbed to extensive rot and decay. Tropical Storm Season begins June 1, and if high winds strike the windmill, there is a possibility that it will come crashing down. 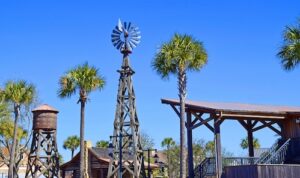 In order to fund the demolition and restoration of the windmill and water tower, which serve no functional purpose and are purely decorative, the Project Wide Advisory Committee will be asked to consider an emergency budget resolution to be considered by the full project advisory committee.

According to estimates, the cost of deconstructing and restoring the windmill and water tower will be $225,000. It is anticipated that the funds will come from maintenance assessment fees collected from residents of The Villages who live south of County Road 466.

Both structures have been in place for about a decade.

“They have developed extensive rot and decay as a result of years of exposure to the elements, including weather, humidity, sun, and water. Throughout the system, there is significant rot in each structure, which has compromised the structural integrity of the system.

A safety hazard assessment has been completed, and the windmill must be disassembled and removed prior to the start of the Hurricane Season, according to Brown in the memo.

‘The project has already received approval from the Villages Design Division,’ according to Brown’s memo. The division is headed by Tracy Morse.

For PWAC, this is not the first time that rotting wood at Brownwood has resulted in a financial loss. PWAC approved the expenditure of $63,500 in 2019 to replace rotting wood at the entrance to Brownwood Paddock Square, which was previously approved in 2016.