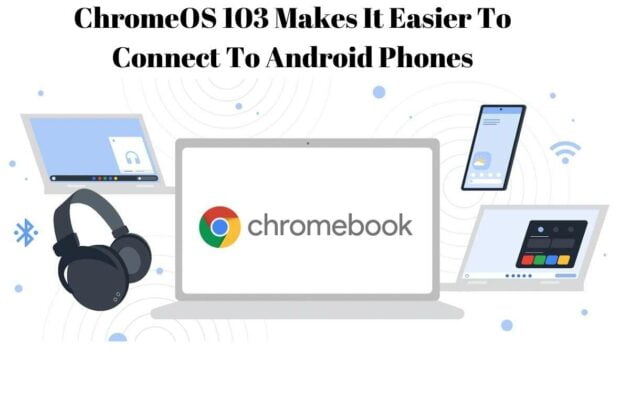 Over the past year, Google has been working on new Android and Chromebook capabilities that help bridge the gap between smartphones and laptops. Some new capabilities have been added to ChromeOS version 103 in an effort to make it easier for Chromebooks to connect to Android devices. Last year, ChromeOS introduced a new feature called Phone Hub that would allow users to view images taken within the past year on their phones.

If you’ve recently taken a photo on your phone, the 103 ChromeOS updates will make it easier to find it in the Phone Hub. It’s a quick and painless approach to avoid having to trawl through Google Photos to discover a recent photo that you took. Even if you’re not connected to the Internet, it works. Chromebooks can now be connected to any stored Wi-Fi network on an Android phone using Google’s Nearby Share function. As with Apple’s tight integration between its iOS devices and Macs, this should make it easier for a friend or family member with a Chromebook to connect to your Wi-Fi.

Indeed, Google’s recent updates to ChromeOS have been part of a larger strategy to rival Apple’s and Microsoft’s ecosystem integration efforts. Better Together” is the name of Google’s project, which aims to improve how Android, Chromebook, and Bluetooth-enabled devices interact together.

Google is working on a system that would allow you to use any messaging app on your phone directly on a Chromebook, such as WhatsApp and Telegram. This summer, Bluetooth headphones will pair faster thanks to Google’s “Fast Pair” framework.

New Bluetooth headphones may be easily connected to Chromebooks thanks to a pop-up notice that alerts users to the presence of a new device. As on Windows, or with AirPods on a Mac, the pairing process is simple. More “Better Together” capabilities will be available later this year, according to Google, and the company plans to “share more exciting Chromebook announcements this summer.”

What Is A Chromebook?

Trying to figure out what the big deal is? Chromebooks, a more cheap and user-friendly laptop replacement, first appeared on the market in 2011. It has been an enormous success, especially in schools. Compared to other options, they’re easy to maintain, quick to boot, and hundreds of dollars cheaper. But what exactly is a Chromebook? Is it the best option for you?

What Is Chrome OS?

Chromebooks are a distinct type of laptop from both Windows-based PCs and Macs running Apple’s macOS operating system. An alternative operating system, known as Chrome OS, runs on Chromebooks. Chrome OS is similar to running your laptop entirely off of Google’s web browser. It’s a more condensed, streamlined version of other OSes. What Chrome OS is like is familiar to everyone who has used Chrome as a web browser.

Chromebooks are able to run software and files stored online since they are connected to the internet. Because of this, your Chromebook doesn’t need to have the most powerful processor or a tonne of internal storage. There is no need for additional hardware or software. Chromebooks are a great option for people who rely heavily on Chrome, Google Drive, and other cloud-based applications.

How Have Chromebooks Changed Since They Were First Introduced?

Chromebooks have come a long way since they first appeared in 2011. The initial perception of these devices was a little more than low-cost laptop replacements with limited capabilities. With Think Intel® CoreTM CPUs and full HD displays, integrated fingerprint readers, and digital pen compatibility, Chromebooks now provide a lot more bang for their buck than they did a few years ago.

When it comes to laptops, you’ve got your standard clamshell models—the ones that can be opened and closed. Then there are the 2-in-1 laptops and 360-degree hinged convertibles of the future. To be clear, two-in-one Chromebooks can be used as both a laptop and a tablet. This feature is not available on all 360 convertible laptops, which may be used in laptop, stand, tablet, or tent modes by swinging the screen back all the way.