In the acrimonious campaign for governor of Arizona, Republican Kari Lake still has a chance to overtake Democrat Katie Hobbs. Election workers are still tallying votes in several counties, including Maricopa, the state’s most populous and electorally significant county.

In daily news briefings, officials have pleaded for patience while emphasising that the procedure is proceeding normally and in compliance with the law. But that hasn’t prevented some Republicans, including former President Trump, who has endorsed and campaigned for Lake, from spewing a volley of increasingly cynical conspiracy theories.

After news sources predicted on Friday that Blake Masters, a candidate for the Senate backed by Donald Trump, would lose to Sen. Mark Kelly, the incumbent, the former president has been critical of Arizona elections for days. He also targeted Nevada, where it was anticipated that Democratic incumbent Sen. Catherine Cortez Masto would defeat Republican challenger Adam Laxalt and secure Democratic control of the Senate.

Masters declared on Friday that he would not give in until “every lawful vote is counted.” The same day, Lake was questioned by Fox News anchor Tucker Carlson about social media messages that claimed Lake’s opponent didn’t run a vigorous campaign because she intended to cheat. Lake expressed her understanding of the motivations behind the online debates and criticised Hobbs, Arizona’s secretary of state, for handling election administration.

“Our elections were so bad. They are poorly run. Fraud is rife there, she declared. “Our elected representatives warn us that bringing it up will make us look like conspiracy theorists or election sceptics. Darn it, we need to start talking about this. Election officials in Arizona, notably in Maricopa County, have been working extra hours as they go through hundreds of thousands of mailed votes that were returned on election day to battle criticism, false information, and accusations of wrongdoing.

The majority of the criticism has come from Lake, her campaign, and her allies, who include conservative commentators like Carlson, Charlie Kirk, and Stephen K. Bannon, a former Trump adviser who joined her at a rally last week, in addition to Trump. Her followers have denigrated election authorities and accused them of “slow rolling” the results through social media and appearances on conservative media channels.

In those interviews, Lake said that she is “100%” certain that she will win the contest and that she hasn’t committed to accepting the outcome if she doesn’t. She declared that one of her first actions as governor would be to convene a special session of the legislature to restructure the state’s electoral process and do away with early voting.

Republicans held sway over Arizona’s two legislative chambers, the governor’s office, and the top positions in Maricopa County before the 2022 midterm elections. Arizona cut the percentage of votes cast for the top two candidates that must be recounted to 0.5% earlier this year.

The “America First,” pro-Trump movement, which suffered huge setbacks on Tuesday when the “red tsunami” predicted by analysts and pollsters failed to materialise, would benefit greatly from a Lake victory. Trump supported hundreds of candidates in the run-up to the midterm elections who reiterated his bogus assertion that the 2020 presidential race was stolen from him by widespread fraud.

Several of the failed Republican candidates, like Kristina Karamo, the contender for secretary of state in Michigan, and Doug Mastriano, the nominee for governor of Pennsylvania, would have held crucial positions to oversee the 2024 presidential election. Trump is anticipated to make his reelection plans public on Tuesday at his Mar-a-Lago resort in Palm Beach, Florida.

According to the Associated Press, a Democrat won a crucial contest for secretary of state in Arizona on Friday night in addition to Kelly defeating Masters for reelection. On January 6, 2021, Adrian Fontes defeated Mark Finchem, a representative of the extreme right organisation the Oath Keepers. 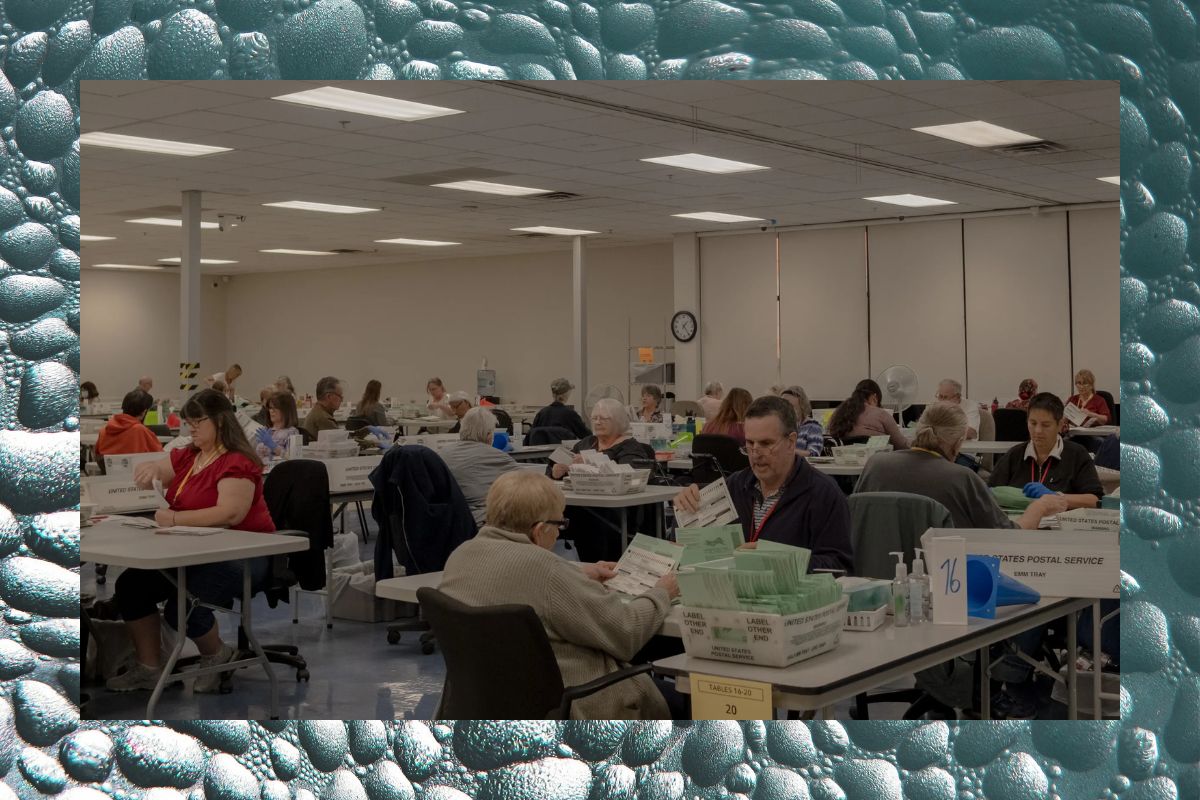 The stakes in the governor’s campaign have increased as a result of the failures of Finchem and Masters, who claimed that Trump would be in the White House right now if the 2020 election had been “free and fair.” Lake was seen to be the most well-liked of the Trump-endorsed candidates and has been mentioned as a potential candidate to be Trump’s running mate in 2024. Republicans at the state and federal levels have concentrated their attention on Maricopa County, urging officials to implement “round-the-clock shifts of ballot processing” until all votes have been counted.

In a statement on behalf of the Republican National Committee and the Republican Party of Arizona, conservative lawyer Harmeet Dhillon said, “We will not be reluctant to take legal action if necessary to safeguard Arizona voters’ right to have their ballots counted.” The GOP chairman of the Maricopa County Board of Supervisors, Bill Gates, responded to criticism of the length of time it has taken to count the votes and vehemently rejected the notion that officials were purposely delaying the results, noting that the county’s election workers have been working 14 to 18 hours per day.

Gates assured the public on Thursday that the process was moving quickly. And very frankly, Kari Lake’s statement is offensive. He explained that because of the country’s “first in, first out” methodology, early ballots received on the final day of voting have not yet been counted. Since the 2020 election, election officials have come under more scrutiny and threats, especially in Maricopa County. Numerous Trump fans, some of whom were armed, demonstrated in front of the county election office after Joe Biden’s 2020 campaign was declared in the running.

Election day mistakes that may have gone unnoticed in the past are now the source of widespread fraud rumours. In Maricopa County, a printer malfunction prevented around 17,000 voters from using the voting machines at 30% of the county’s polling places on election day. After the problem was resolved, voters had the choice of putting their ballots in box 3, a safe drawer.

No voters were disenfranchised, according to officials who discussed the matter at many press briefings. On Friday, Trump posted on Truth Social that “idiot, and maybe corrupt, officials have lost control of the rigged Election in Arizona.” “IMMEDIATELY A NEW ELECTION MUST BE CALLED FOR!” The printer troubles have been used by some Republicans as additional justification against the use of voting machines, which came under heavy scrutiny in 2020 after Trump attorney Sidney Powell falsely claimed Dominion Voting Systems machines were used to alter Trump votes in favour of Biden.

In the days following the election, detractors focused on the speed of the ballot counting, charging officials with engaging in a political postponement to conceal Lake’s victory or withholding just batches of ballots that support Republicans. In an interview with Kirk, the founder of the conservative youth activist organisation Turning Point USA, which has its headquarters in Phoenix, on Thursday, Lake claimed that “they’re trying to pour cold water on this movement.” No amount of water can put out the fire that is this movement.

Voters in Arizona have had the option to obtain early or absentee ballots for years without giving a justification. It has taken an average of 10 to 12 days to verify, process, and tally those ballots because the choice has been well-liked. Before election day, Arizona has taken several actions to speed up the process. A few weeks before the election, election workers are permitted to begin processing and verifying signatures on early ballots.

Additionally, the law mandates that early ballots be submitted by the time the polls close on election day at 7 p.m. According to Gerry Langeler, the National Vote at Home Institute’s director of research and communications, there is a reason why the state’s procedure is more cumbersome than others. They are cautious, he remarked. And kudos to them for exercising extreme caution.

In previous elections, when media outlets could call races for Republicans right away following the resounding victory, Arizona’s ballot-counting schedule wasn’t given as much scrutiny. However, the once-reliable GOP bastion has turned more purple, making some of the races this election year more competitive. Because of these considerations, Arizona election officials are in a challenging situation as some of the most prominent proponents of fictitious claims of election fraud are currently awaiting the results of the fiercely contested race between Lake and Hobbs.

Election officials may face danger during the time between the closing of the polls and the announcement of the results, as evidenced by the aftermath of the 2020 election. Longer gaps give opportunities for allegations of fraud, pointless lawsuits, conspiracies, and threats of violence to materialise.

After a few relatively quiet days, protesters began to assemble outside the Maricopa County election facility on Saturday, holding placards and billboards that included the phrase “Hobbs is a cheat.” Right-wing Arizona state senator Wendy Rogers called on “patriots” to “stand up” and demonstrate at the office on Saturday afternoon in a tweet that, according to Maricopa County Sheriff Paul Penzone, was the cause of the demonstration. Later, Rogers changed his position after Kirk and other conservatives pushed Americans to stay at home.

Rogers tweeted, “Hey everybody, honestly, it’s better for people to STAY AWAY from Maricopa county offices, SO THEY CAN FINISH their job of counting votes.” “An excuse to halt the counting is the last thing anyone wants. Understood?” Around 290,000 early or absentee ballots that were delivered on election day are under question. Republicans argue those “late early” ballots will favour their party because they urged their supporters to cast their votes in person on election day or hand-deliver their early ballots.

Paul Bentz, senior vice president for research and strategy at HighGround Inc., a Republican public affairs firm in Phoenix, said, “That’s the $10,000 issue. “What do they do? How do they appear? The greatest amount of supposition stems from that. While it’s obvious that Republicans opted to cast their ballots in person and Democrats dominated early ballots received before election day, history is divided on which party the late early votes will support.

These votes in 2020 backed Republicans and assisted in reducing Biden’s lead over Trump. However, in 2018, they leaned Democratic, enabling Kyrsten Sinema to unseat Republican incumbent Sen. Martha McSally. Lake stated that she anticipates a repeat of 2020.

If you are seeking some other information, then lakecountyfloridanews.com can help you.