According to sheriff’s officials, a man in an Orange County neighborhood shot and injured two teenagers who were breaking into his car. The teenagers were taken to the hospital.

At around 2 a.m, reports of a shooting on Martinwood Drive near Elderwood Lane, south of Silver Star Road in Pine Hills, were received. 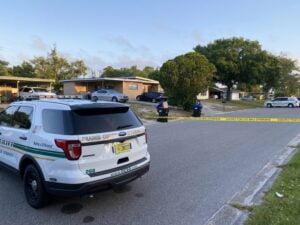 Officials with the Orange County Sheriff’s Office said deputies were dispatched to the 2000 block of Martinwood Drive and spoke with a man who claimed he confronted two teenagers, ages 13 and 16, who were attempting to steal his car.

According to authorities, the man claimed that the teens made threatening movements toward him, and he responded by firing several shots.

Maria Vaszques claims that her son was forced to open fire in order to defend himself during the incident.

“He said, ‘Aye, what are you up to?'” “I’ll put whatever you want in my car,” Vazquez explained. “My son said (one of the teens had) something, and he smacked him in the face with something.”

According to the sheriff’s office, a stolen gun was discovered near one of the injured teenagers.

Officials said the teens were taken to a hospital with non-life-threatening injuries and are expected to recover.

Police said the man who opened fire told them that his car had been broken into several weeks before the shooting, though the incident went unreported at the time. Officials said one of the teenagers who was shot on Thursday allegedly “had evidence from another burglary on their person at the time of the shooting.”

However, authorities have not yet revealed where the teenagers were standing at the time of the shooting.

As evidence markers lined the street, detectives walked around the scene looking for evidence, according to News 6.

Vazquez stated that her son is still in shock as a result of the incident.

“My son is a good person, and he puts in a lot of hours here,” she explained.

The mother went on to say that it was the second time in a month that someone had broken into their family’s car.

Although detectives confirmed that one of the teens was in possession of evidence from the previous burglary when they were interviewed Thursday morning, they would not say what they had discovered.