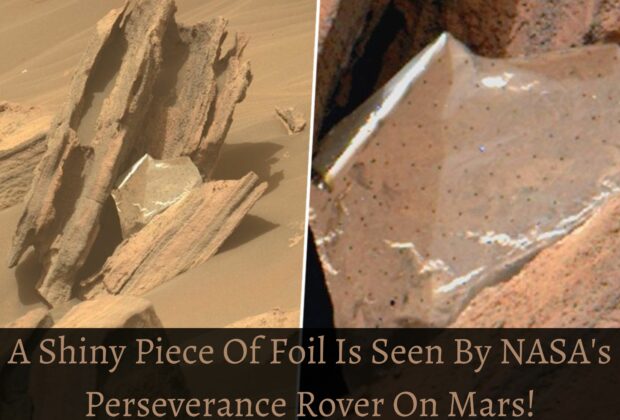 A sparkling bit of foil that got trapped on a rock on the red planet has been revealed in an image taken by NASA’s Perseverance Mars rover. According to the space agency, the foil fragment is a component of a thermal blanket that is wrapped around the rocket to control its temperature when it is landing.

“My team has spotted something unexpected: It’s a piece of a thermal blanket that they think may have come from my descent stage, the rocket-powered jet pack that set me down on landing day back in 2021,” read a team message that was posted to the rover’s Twitter account.

The team expressed surprise at the foil’s placement, which was almost 2 km from the site of the descent. The team speculates as to whether the fragment was carried there by Martian winds or fell thereafter the rover descended. According to reports, the rover’s Mast cam-Z camera took the picture of the foil on June 13. It is covered in black spots all over.

That shiny bit of foil is part of a thermal blanket – a material used to control temperatures. It’s a surprise finding this here: My descent stage crashed about 2 km away. Did this piece land here after that, or was it blown here by the wind? pic.twitter.com/uVx3VdYfi8

As part of NASA’s Mars 2020 project, the Perseverance Mars rover was launched on July 30, 2020, and it touched down on the planet in 2021. (February 18). In the Jezero Crater on the planet, the rover is currently keeping an eye on an ancient river delta region. The rover’s primary job is to look for evidence of life and gather samples of rock and regolith (broken rock and soil) in preparation for a potential return to Earth. The rover is expected to unearth important proof of microbial life on the red planet, according to the space agency.

The Mast cam-Z cameras on the Rover’s head may be zoomed in and out to produce high-resolution, color 3D panoramas of the surface of the planet. Additionally, the Super Cam, which has its own microphone and can analyze the chemistry of rocks and sediments, is mounted on its pole. The Perseverance rover is the most advanced robotic geologist ever created, claims the space agency.

My team has spotted something unexpected: It’s a piece of a thermal blanket that they think may have come from my descent stage, the rocket-powered jet pack that set me down on landing day back in 2021. pic.twitter.com/O4rIaEABLu

The rover will examine the crater’s geology, characterize the previous temperature of the area, and determine whether water and microbial life were there. The Mars Sample Return programme, which is being planned by NASA and the European Space Agency and will enable researchers on Earth to analyze samples obtained by the rover, will benefit directly from this effort.

A photo of the crew who thermally blanketed NASA’s Perseverance Mars Rover is posted on the rover’s Twitter account. Think of them as dressmakers for spacecraft, the message advised. To assemble these distinctive fabrics, they use sewing machines and other instruments.

NASA’s Perseverance Mars Rover’s Facebook page said that the shiny part was a piece of the thermal blanket it was wrapped in before being sent to Mars. It might have landed on Mars last year when the rover went down.