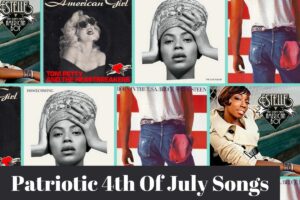 Regional odes like The Mamas and the Papas’ mournful “California Dreamin'” and John Denver’s love tale to West Virginia, “Take Me Home, Country Roads,” round out our Independence Day playlist. Plus, to balance out your playlist, we added some more cerebral selections, like Childish Gambino’s searing assessment of the country’s systemic failings, “This Is America.”

Are you looking for additional holiday ideas? Check out our list of the finest 4th of July movies, 4th of July trivia to share with friends and family at the BBQ, and our collection of the best 4th of July quotes to share on social media (or just a jolt of tear-jerking patriotism). Also, don’t miss our 4th of July beverages, dessert ideas, and a variety of dishes for a delectable, crowd-pleasing get-together.

Top 10 Patriotic Songs For the 4th Of July

On July 4th, the most famous rendition of The Star-Spangled Banner must be performed. You’ll be moved to tears by Houston’s performance in the 1991 Super Bowl.

Dolly Parton released a full album dedicated to America in 2003. Color Me America, a ballad that states, “I am red, white, and blue,” is one of the most emotional tracks on the album.

Miley Cyrus was still a teenager when she released her huge single in 2009, with autobiographical lyrics about her move from Nashville to Los Angeles to pursue her dream of becoming a pop star. Everyone will want to get up and dance to this song, which is appropriate for all ages.

With its endlessly catchy lines and encouraging chorus: “You just gotta ignite the light, and let it shine,” Katy Perry’s 2016 hit is perfect for the Fourth of July. Just own the night like it’s July 4th, ’cause you’re a firework, so come on, show ’em what you’re worth… “

Don McLean’s 1970s hit notoriously laments “the day the music died,” a reference to the 1959 plane disaster that killed Ritchie Valens, Buddy Holly, and the Big Bopper all at once; the song’s lyrics also mention Elvis Presley and Bob Dylan. Overall, the timeless classic is rooted in nostalgia and Americana.

This moving song, taken from Neil Diamond’s film The Jazz Singer, hails immigration to America: “On the boats and on the flights, they’re flocking to America.” They’re coming to America, never looking back.” It all comes to a close with a powerful spoken-word rendition of “My Country, ‘Tis of Thee.”

Bruce Springsteen’s classic from the perspective of a Vietnam war veteran has been around for decades. Even if it has some grim undertones when you listen closely, it will have listeners yelling out the lyrics gleefully.

“Kids in America,” a 1981 favorite by Kim Wilde, screams “dance party.” The lyrics transfer you to a time and place where there is little responsibility, nothing is taken seriously, and it’s all about being young and having a good time while listening to loud music.

9. Fight For Your Right

Sure, it’s not the most intelligent song ever written, but isn’t this a party?! The legendary ’80s tune by the Beastie Boys will get the beer cans popping and the excitement flowing.

In this amusing duet, British Estelle imagines Kanye West as her cool “American boy,” and she enthusiastically invites him to accompany her on a vacation throughout the country, showing her all of the famous sights: “Take me to San Francisco Bay, Chicago.” I’d like to see Los Angeles, so please take me to New York… “

Poppy Playtime Chapter 2 Has Been Released: Will There Be A Chapter 3?