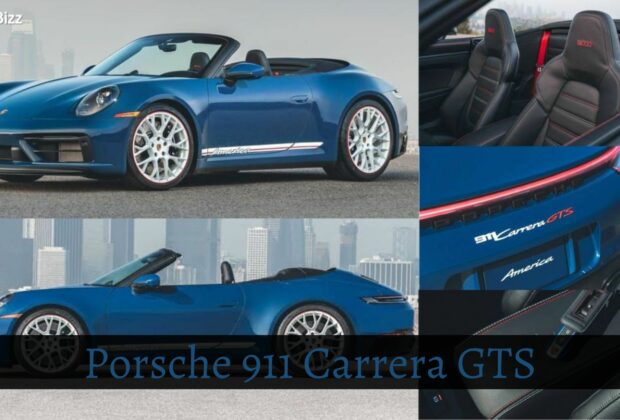 The red, white, and blue 911 Carrera GTS Cabriolet, Porsche’s newest special-edition model, was unveiled to North American purchasers on Sunday. The automobile is a tribute to the 1953 Porsche 356 “America” Roadster, which was specially built for the American market with the cooperation of NYC Porsche dealer Max Hoffman 70 years ago.

Despite the fact that the first car was a commercial flop (only 16 examples were ever constructed), it served as the foundation for the successful Speedster range. Now, 115 customers will have the opportunity to own a Porsche 992 with a unique stylistic package inspired by the original 356 America.

The 911 in question is a basic Carrera GTS Cabriolet with no performance or suspension upgrades, however, it is only available with a seven-speed manual transmission. It has model-unique hand-painted white and red wheels, as well as an exclusive rocker graphic, as well as the first usage of a new Exclusive Manufaktur paint-to-sample blue (Azure Blue).

“No 992 [chassis 911] existed with a black windscreen frame [before the America Edition],” according to Boris Apenbrink, head of vehicles at Porsche Exclusive Manufaktur, and the process of making the A-pillars black required an extra step in the manufacturing process where the surround was foiled with a black matte finish. Buyers of the All America Edition get Guards Red and Pebble Gray cross-stitching on a black leather inside to help them feel more patriotic.

A red-colored pattern on the shift knob, red-and-gray headrest stitching, a red centre stripe on the steering wheel, and a color-matched key fob are all included in the $7,510 interior package. Unfortunately, would-be America Edition owners will have to bring an order sheet for bragging rights, as despite the low three-digit manufacturing quantity, the 911 will not receive any plaques proclaiming its rarity.

After delivery, this special edition will cost you only $186,370 (excluding the special key paint and extra embroidery, which will cost you almost $190,000). That’s around $37,000 more than the base price of a 2022 Porsche Carrera GTS Cabrio.

Although the paint is stunning, purchasers can wait until 2024 when Azure Blue is added to the paint-to-sample Exclusive Manufaktur catalogue, which already includes over 150 colours, and then have it sprayed on any special-order Porsche they like. If it’s still appealing, act quickly: only 100 will be shipped to the United States, with the remaining 15 going to our northern neighbours in Canada.