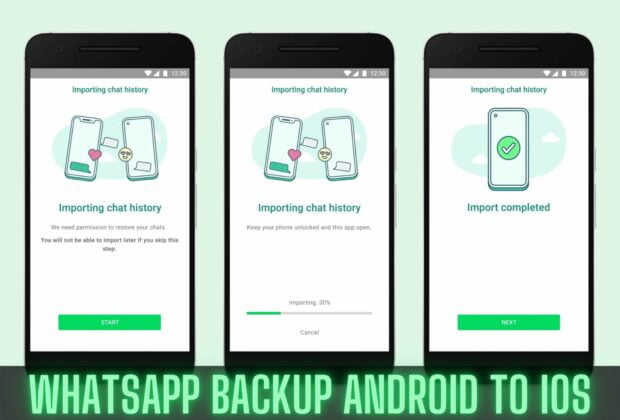 It has been simple to move your WhatsApp conversations from iOS to Android for several months, but doing it the other way around is trickier. However, rest assured that this will soon change.

In fact, WhatsApp will now make it simpler to move your messages and chat history from Android to iOS. Mark Zuckerberg, the CEO of Meta (the organization that owns the well-known messenger), made the announcement in a post on Facebook on Monday, June 13, 2022. Keep in mind that the beta version of this functionality is currently accessible.

And how does it operate? WhatsApp and Apple have partnered to use the Move to iOS app to streamline the process. This program, among other things, can move contacts, message history, pictures, videos, email addresses, and calendar entries from an Android handset to an iPhone.

Additionally, it makes it simple to download all of your apps in their iOS versions because the App Store’s app icons are displayed right on your iPhone’s home screen. To begin the installation, simply click on it.

Mark Zuckerberg announces the ability to move chats to iOS!

Mark Zuckerberg just revealed on Facebook another top requested feature for WhatsApp: the ability to transfer our chat history from Android to iOS!https://t.co/TParp0dWF7

Additionally, as of this coming Tuesday, June 14, Move to iOS integration will be made available on WhatsApp. In other words, WhatsApp will show up as a data source when you use the programme to move all of your data from an Android smartphone to an iPhone.

So, everything (including messages and conversation history) will be transferred to your iPhone. Then, to verify the transfer, simply download the WhatsApp app on your brand-new iPhone (or restore it to factory settings) and sign in with the same phone number that you used on Android.

It should be noted that in order to complete the operation, a smartphone running Android 5.0 or later is required, as well as an iPhone running iOS 15.5. Additionally, your Android device data will instantly replace any existing iOS WhatsApp chat history.

WhatsApp integrated with ‘Move to iOS’

According to Engadget, WhatsApp will soon be a transferable app option when moving your data via Move to iOS. When you choose WhatsApp, it will launch instantly and request your consent to transfer your data.

Apple will also pre-load the app onto your home page; all you need to do is tap it to complete the iPhone installation. Don’t rush this because the Move to iOS transfer procedure can take some time. I’ve used the app before, and it took around an hour, even though I just sent a small amount.

When you initially launch WhatsApp on your iPhone, you will also need to authenticate, according to Engadget. Before the data is decrypted, this must be completed. Your WhatsApp conversation history should be securely stored on your new smartphone once you’ve finished.

Use iCloud To Backup Your Chats

Additionally, you should backup your communications to iCloud as an extra measure of security. To do this, visit:

Toggle WhatsApp on by scrolling down and finding it there to make sure it’s saved in your subsequent backup. Stay on the same menu and select “iCloud Backup” to make sure your iPhone backs itself up to the cloud. You can choose “iCloud Backup” to alter or view the date of your most recent iCloud backup. It should say On or Off.

For details on how to install the beta, see WABetaInfo There is no word yet on when all users will be able to use this service.