Pullman police say that a member of the Whitman County Regional SWAT team shot and killed a man after a standoff early Thursday morning.

Police went to the 1000 block of Latah Street after getting a call about a weapon crime at 8:37 p.m. Wednesday, according to a news release from the department.

Police say the suspect started shooting from his apartment, and they had to clear the area.

At 3:20 a.m., WSU sent out an alert telling students to stay in place.

Pullman police said that a member of the responding SWAT team shot and killed the man after talks failed, his behavior got worse, and he kept putting the public and officers in danger.

When the Whitman County Regional SWAT team cleared out the apartment, they found the man dead, police said.

At 4:45 a.m., WSU sent out an “all-clear” message, and WSU Pullman went back to business as usual.

The Washington State Patrol is looking into what happened and why it happened. Police said that the investigation must be separate from the agency whose officer used lethal force.

Police said that more information will be given out by the Patrol. 2 Shot at Charlotte’s Northlake Mall, 1 Has ‘life-threatening’ Injuries
Next Article 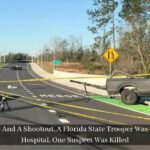