Young Justice season 5: After the conclusion of Young Justice season 4, fans are eagerly awaiting news on the series’ renewal and the possibility of a fifth season. Young Justice, which was originally made for Cartoon Network, established a cult following among comic book enthusiasts and teenagers, rather than the young boys for whom the program was intended. When the program was canceled after two seasons, this unexpected audience rallied, gaining Young Justice a second chance on the DC Universe streaming service, where it was picked up for a fourth season on HBO Max.

Season 4 of Young Justice began one year after the season 3 finale, with Miss Martian and Superboy preparing for their wedding. From then, the season’s plot branched out, with six unique narrative arcs focusing on the initial members of the Young Justice team of teen sidekicks, showcasing how they had developed over the course of a decade. In the build-up to the season 4 finale, these seemingly unconnected character-focused episodes came together as the youthful heroes met with their oldest friends and teammates to prevent an invasion of Earth.

This slow-burning tale culminated in a race against time, when a group of heroes from the Green Lantern Corps, the Justice League, and the time-displaced Legion of Superheroes banded together to stop General Zod and his son, Lor-Zod, from carrying out their plans. The finale ended happily, with Superboy and Miss Martian eventually marrying, but the heroes of Earth-16 and their friends still face a multitude of threats. However, whether or not there will be a Young Justice season 5 to follow up on the cliffhanger endings and post-credits scene from the Young Justice season 4 finale remains to be seen. Here’s all we know about Young Justice season 5 thus far.

Is Young Justice Season 5 In The Works?

At this point, it is unknown whether or not a fifth season of Young Justice will be produced. The showrunners, Greg Weisman and Brandon Vietti, have stated that they have ideas for several more seasons of the popular animated superhero series, and the season 4 finale of Young Justice sets up multiple story hooks for the following season.

Weissman, on the other hand, warned his Twitter followers that the show’s future was uncertain, telling one fan who inquired about the release date of Young Justice season 5 that “the first question is ‘if,’ not ‘when.'” This sparked a community movement to increase the number of people watching all four seasons of Young Justice on HBO Max and to make the show’s name trend on social media.

What Would The Story Of Young Justice Season 5 Be About?

Spoliers for #YoungJustice
Holy shit that #YoungJusticePhantoms finale was so good. I’m so glad Conner and M’gann finally got their happy ending. And that end credit reveal. I definitely need a season 5. #RenewYoungJustice #YoungJusticeSeason5 #SaveEarth16 pic.twitter.com/ehPBLtO8mm

Young Justice season 4’s end scenes hint that at least one space conflict would be part of the season 5 storyline. Except for one prisoner who was given over to Darkseid, Vandal Savage imprisoned all of the Kryptonians stranded in the Phantom Zone within his Warworld fortress.

In a post-credits scene that also revealed the fate of Mary Marvel during Young Justice season 4’s mid-season finale, this prisoner was revealed to be Superman’s cousin, Kara Zor-El. In preparation for an invasion of Earth, both teenage ladies were recruited by Granny Goodness’ elite Furies team. Aside from that, Ursa Zod, the new Emerald Empress, is still on the run, having fled to the planet Daxam to give birth to her son.

When Will Young Justice Season 5 Going To Be Happen? 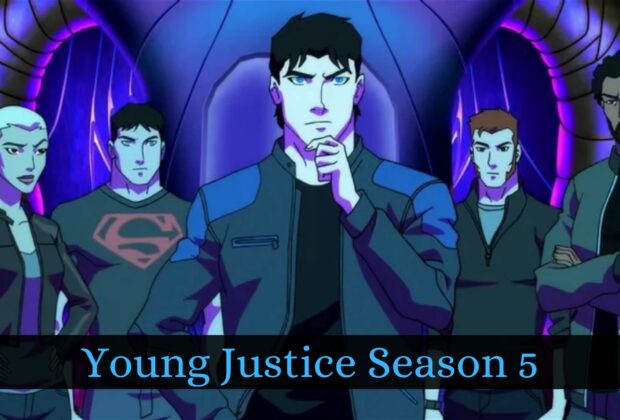 This assumes that HBO Max accepts the new season’s production soon. It’s feasible, however, that a new season of Young Justice may be put together more quickly this time around because there are no concerns about the show being picked up by a new network.

Dick Grayson (Jesse McCartney) portrays Robin, Batman’s student and a juvenile prodigy with high-tech gadgets and security hacking abilities. During the interval between seasons one and two, he outgrows his Robin identity and transforms into Nightwing.

Aqualad (Khary Payton) is an original character that can breathe underwater and employ hydrokinesis, the power to raise the local specific density of water and subsequently modify its shape. He is the protege of Atlantean Aquaman. He is revealed to be the second Aquaman in season three.

Kid Flash, The Flash’s protégé, is played by Wally West (Jason Spisak). He is capable of running at supersonic speeds. In the Season 2 conclusion, he dies protecting the planet from an extraterrestrial bomb. As a genomorph clone, Superboy (Nolan North) is a Kryptonian-human hybrid who shares many of Superman’s abilities. Later on, he goes by the name Conner Kent.

Miss Martian (Danica McKellar), also known as M’gann M’orzz or Megan Morse (Danica McKellar), is Martian Manhunter’s niece. She has strong telekinetic, empathic, and telepathic abilities, as well as the ability to fly and shape-shift, just like her uncle. In season 1, she lacked the innate Martian skill of intangibility (dubbed “Density Shifting” by Martians), but she has since learned it.

Green Arrow’s protegee, Artemis Crock (Stephanie Lemelin), is a very athletic expert archer who originally pretends as his niece to the Team.

Young Justice’s Voices: From a list of 50 to 60 DC Comics adolescent superheroes, the creators chose the first six main characters as potential candidates. The criteria included age, power, personality, cultural icon status, and dynamics. Zatanna was debuted as a new regular midway through the first season, and Rocket was added near the conclusion.

Lady Gaga In Talks To Play Harley Quinn In ‘Joker 2’

Who Is Lady Gaga Dating Now, Is She Breakup With Michael Polansky?