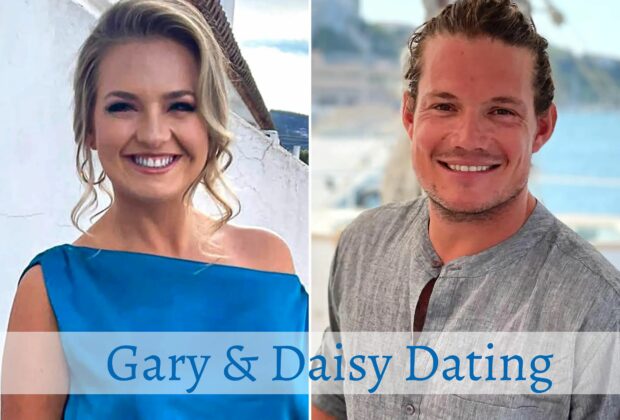 Are Gary & Daisy Dating: What a voyage, everyone: Below Deck Sailing Yacht season 3 is over, but Gary and Daisy Below Deck romance rumors are still going strong because of a tense episode in the season finale involving the first mate and chief stew of the Parsifal III.

The crew had a lot to celebrate in this final episode of season 3 (don’t worry, a reunion episode will air next week), earning a whopping $160,500 in total tips during the whole charter season in addition to a $20,000 tip and a magnum of Veuve Cliquot for the boat’s final charter.

However, everyone is focused on one question: Is Gary going to Scarlett’s or Daisy’s bed? However, it appears that after weeks of will-they, won’t-they, Gary King’s eyes are zoom-focused on Daisy in this week’s episode.

This is despite the fact that both crew members and viewers are intrigued by the messy love triangle (quadrangle if you count newly promoted “lead stew” Ashley Marti) between Daisy Kelliher, Gary King, and third stew Scarlett Bentley.

Daisy and Gary are officially official. Thoughts on the new couple?! #BelowDeckSailingYacht pic.twitter.com/m7NWAUEbZc

Gary admits that his friendship with Daisy has been his favourite part of the season during the last staff dinner. It’s meant a lot to me, Gary adds, “Coming up from last season, we’ve just got along like a house on fire, and you and I are closer than ever.”

“It honestly made me feel like there might be true love out there,” Kelliher says of the waterfront wedding from the previous week’s Below Deck Sailing Yacht season 3 episode 16. Hello? Hello!” From the opposite end of the table, Gary mockingly yells.

Daisy claims she hasn’t had sexual relations with Gary when later questioned about it by deckhand Barnaby Birkbeck. The crew returns to the boat for some hot-tub activity, but that doesn’t stop the chief stew from getting downright steamy with the first mate.

“So can you and I, just once in our lives, please,” Daisy begins. Have sex? Gary swiftly and playfully responds. Where will we meet? Port or starboard? You inform me.

Until Gary tells her, “You change into something dry and then we’re going to go sleep in the guest cabin and spoon,” the tipsy twosome continue their flirtatious banter. But not before dragging Daisy inside her cabin and lying down in bed with her. Deckhand Kelsie Goglia, Daisy’s roommate, enters and terminates the passionate exchange.

She confesses, “I have no idea what’s going on, but I’m hoping they move out of my way soon so I can go to sleep. Daisy later admits to Kelsie, “I don’t think we genuinely feel anything for each other. Mine and Gary’s relationship is so confusing.” I’m relieved that everyone went to bed.

A short time later, Captain Glenn wakes the crew to pack their bags, disembark the boat, and clean the galley (you don’t even want to know what food-related mischief Ashley got up to). Everyone says their goodbyes in an emotional manner, with the producers naturally saving Gary and Daisy’s for last. Gary tells Daisy, “I want our love to keep developing and expanding.”

King confesses, “I think my connection with Daisy has come a long way from last season.” There is definite sexual tension, but perhaps one day.

Nearly $100,000 Is Raised For A Mother Whose Three Children Were Killed In Round Lake Beach!

Did Tom Cruise Get Plastic Surgery? Check All Details Here!