Levi Ackermann, the leader of the Special Operations Squad, is the strongest and most talented member of the Survey Corps. Thanks to Erwin Smith, who scouted him, Levi, who had a troubled history, was able to change his life by joining the Survey Corps. He is extremely cold, distant, and harsh, but he also possesses great leadership qualities that motivate those around him. Levi is respected by Attack on Titan’s main character, Eren Jaeger, for his leadership and prowess.

Levi frequently exhibits violent techniques of reprimanding and controlling his subordinates, especially Eren, yet he always has the best of intentions. When attempting to train his subordinates who may lose their lives as a result of trivial mistakes made on the battlefield, his strictness in his lessons is absolutely required. He feels responsible for the soldiers he commands because of his lofty status, and he is upset when they are killed.

Levi is portrayed throughout the anime as assaulting Titans quickly and successfully while frequently maintaining a neutral demeanor. Many Attack on Titan fans believe Levi Ackerman to be the show’s strongest character. In spite of not possessing any titan abilities himself, he is as powerful as titan shifters and was formerly regarded as humanity’s strongest soldier at the start of the series.

Levi lived in the Underground and was the son of a prostitute named Kuchel Ackerman. After learning of Kuchel’s sister’s passing, Kenny Ackerman, Kuchel’s brother, takes Levi under his care. Kenny imparted to Levi all of his knowledge. Given that Kenny was notoriously known as Kenny the ripper, he was particularly talented in the art of murder. As Kenny states in the anime series’ Season 3, Episode 10, he wasn’t ruthless enough to let a child die, but he wasn’t decent enough to be a parent either.

As the scene switches from Levi clutching a weapon and swinging it to intimidating people like a gangster, Kenny teaches Levi how to survive in the underground by teaching him how to “get along with people,” “welcome people,” and close transactions. When Kenny decides that Levi has learned all that needs to be learned, he leaves him in the middle of a fight one day.

Why Captain Levi Is One Of The Deadly Character In Attack On Titan? 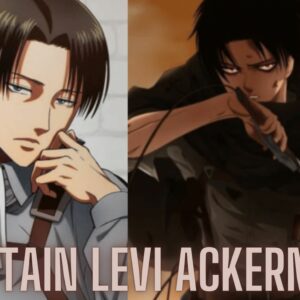 Levi, who excels in battle, initiative, and intelligence, is a born leader but doesn’t see himself in that role. Erwin Smith is a better leader than he is, in his opinion, and he has his trust.

Although he is frequently perceived as being uncaring, he demonstrates his warmth by helping his friends and allies in need. As shown in Attack on Titan: A Choice With No Regrets – OVA Episode 1 Part 1, through this backstory. Levi gives off the impression of being ignorant and naive. He exhibits a general interest in what is to come as a surface resident. He had a chance to live a normal and honourable life while slaying Titans by joining the Survey Corps.

On the 23rd Expedition outside the walls, his two pals Isabel Magnolia and Furlan Church are killed in this instalment of the series. It becomes obvious why Levi is the way he is after piecing together some of the puzzle pieces. His apathy to basic human events like death and homicide may be explained by his troubled life, which includes losing his mother at a young age, growing up with a violent uncle, being abandoned, and losing two people he was close to.

Path to the Special Operations Squad

Alongside Isabel Magnolia and his pal Furlan Church, Levi spends his adult life as a thug. It is also shown that he and Fraland independently discovered how to use the (possibly stolen) vertical manoeuvring equipment, demonstrating their high degree of ability and cunning.

Levi is initially approached by Nicholas Lobov, who bribes and threatens him to kill Survey Corps Captain Erwin Smith. Erwin had proof of Nicholas Lobov’s wrongdoing and had the power to remove him from his important position if he so desired. Levi is instructed by Nicholas Lobov to join the Survey Corps as a con to kill Erwin. Due to the fact that Levi, Furlan, and Isabel were all from the underworld and may have led lives without documentation, their prize was citizenship on the surface.

The Survey Corps and Erwin later go after him. Levi and Ewin agree on a deal. If Levi joined the Survey Corps on the 23rd expedition outside the walls, his past transgressions as a thug would be pardoned. Levi was still a thug and lacked discipline at the time, but he offered to help the Survey Corps. Furlan and Isabel were killed by a Titan when they were on the trip as things swiftly came to a head. Levi, who had diverted from his original plan to assassinate Erwin Smith, ended up being the sole survivor.

When Levi discovers that his buddies have died, he goes into a murderous rampage and kills the Titan who took his friends’ life. Levi is severely informed by Erwin Smith that his plans have been thwarted and that the investigation into Nicholas Lobov’s illicit conduct is now complete.

We’re going to continue Expeditions, Erwin says. You’re coming with me. Levi decides to go on from here and become the best soldier and leader of the Survey Corps while also developing a deep respect for Erwin Smith.

Levi Is The Only One Who Stopped Eren’s Execution

During the Battle of Trost, a rather identifiable titan came and began aiding the humans. When Eren changed back to his human form, his companions and fellow troops recognised the titan as being them. Despite the fact that Captain Kitz Woermann and Commander Nile Dawk supported Eren’s speedy execution, Armin and Mikasa clearly wished to shield him.

Levi reassures the military commanders and the politicians that he can keep Eren “in check” and that, in the long run, allowing Eren to remain active will be advantageous to the Scouts and humanity. In AoT, protecting a comrade and all of mankind is one of the kindest things someone can do. Even by humiliating Eren and physically harming him in the courts, it was just an act.

Captain Levi has repeatedly demonstrated his superiority as a soldier for humanity. Since Attack on Titan began, his popularity has soared. He is a beloved and perfect character in the show for a variety of reasons.

He Is Tremendously Fast and Sharp

Levi’s cool manner, ominous eyes, and stylish hairstyle all make a strong impression. Despite his appearance, Levi is a particularly skilled fighter. His combat abilities rival those of a god. No other scout could have defeated the female giant as quickly and precisely as he did. He was the key to their success in saving Eren. When compared to everything else he has accomplished, this is merely the top of the iceberg.

If you recall, despite being caught off guard, he was able to kill 12 of Kenny and his team’s men when they launched a surprise attack against him. Mind you, they were all armed. Levi was also the first to act when Reiner, who had just killed a scout, came from the wall. Levi almost killed Reiner by stabbing him in the neck.

Finally, what he did to the beast giant is known to us all. In a little under a minute, he had his lips open after severing his hand off his body.

He Believes in His Ability

Levi promised to kill the beast titan, and Erwin believed him. Even though we know he didn’t, he was so near and would have completed the task had he not faltered. The beast giant had been wreaking havoc and had shown himself to be a cunning strategist. He failed to see Levi approaching, though. He suffered the price because he disregarded Reiner’s advice. Someone with a lot of self-confidence would need to charge across a line of titans with the intention of killing the beast. Who else except Captain Levi possesses this quality?