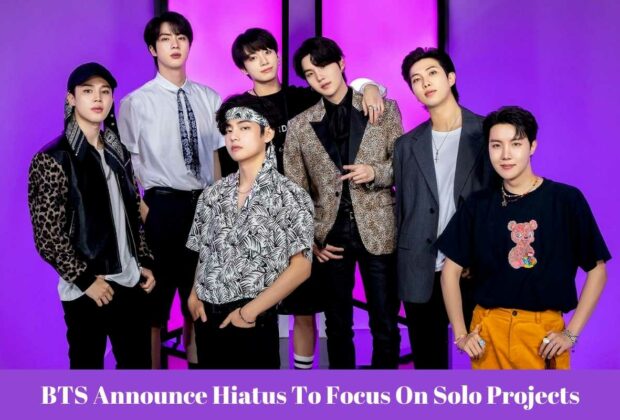 BTS revealed that they are going on an indefinite “hiatus” to let each member focus on their respective separate projects during their Festa dinner on Tuesday evening. The seven-man K-pop group, which consists of RM, Jin, Suga, J-Hope, Jimin, V, and Jungkook, reminisces on their wild journey together in a one-hour video from the event before delivering the news and explaining their future plans.

“We have to realize that we have evolved,” RM explained. “Until ‘On’ and ‘Dynamite,’ I felt like BTS was within my grasp, but after ‘Butter’ and ‘Permission to Dance,’ I had no idea what kind of group we were.” “I believe we should take some time apart to re-learn how to be one,” J-Hope remarked. “I hope you don’t think of this as a bad thing, but rather as a good idea.” That is how I believe BTS will get stronger.”

The band went on to say that their decision to go on hiatus was difficult to make and that they are grateful to their fans for their support over the last nine years. BTS, the global superstars, have announced that they will be focusing on solo projects, but the corporation behind the trailblazing K-pop group has stated that they will not be taking a sabbatical.

.@bts_bighit announce during their annual #FESTA event that they will be taking a hiatus to focus on solo projects. @BTS_ARMY pic.twitter.com/tYVKrVK7bG

In a video released Tuesday to commemorate the nine-year anniversary of their debut release, the seven-member group with hits like “Butter” and “Dynamite” talked about their future. Last week, they published “Proof,” a three-disc anthology record. As they sat down for a group supper, band member Suga asked if they should discuss about why they were going on sabbatical. They talked about how COVID-19 had disrupted their touring and music releases, as well as what they believed about their respective artistic aspirations.

The group spoke in Korean, and the term “hiatus” appeared in the video’s English subtitles. BTS will continue to collaborate on projects as a group as well as individually, according to a statement from Hybe, the South Korean entertainment firm behind them. “BTS will not be taking a break. Members will be concentrating on solo projects at this time, according to the statement.

On Tuesday, no information about future BTS collaborations or solo projects was released. BTS has a global fanbase that follows the group and its members online, and the group’s international prominence has risen in recent years. The group recently spoke at the United Nations General Assembly and visited President Joe Biden at the White House to discuss measures to reduce violence against Asian Americans.

V recounted a chat he had with J-Hope in which they discussed how working on solo projects might help the band’s “synergy.” Suga expressed enthusiasm for experimenting with other genres. To their fans, Jung Kook said, “We’re individually going to take some time to have fun and experience a lot of things.” “We swear we’ll come back even more mature than we are now.”