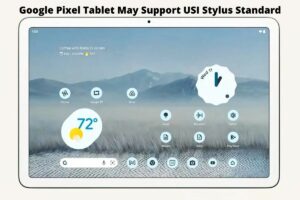 At I/O 2022, Google teased a Pixel Tablet, but just provided a few renders and a vaguely optimistic description. It didn’t mention whether it would enable stylus input, but it appears that it will — the Universal Stylus Initiative has validated a Google tablet (USI). The device is simply referred to as “Tangor” (a citrus fruit), which is undoubtedly a code name. But make no mistake: Google is only working on one tablet: the Pixel Tablet. Even that isn’t coming out anytime soon; it’s set to be released in 2023.

USI devised a standard for styluses that works across brands, as the name implies. Google has been a member of USI since 2018, and some Chromebooks already support a stylus like this. The list is available on the official website. As far as we know, no tablet supports the use of a USI stylus. In any case, the Initiative released version 2.0 of its standard, which includes a mechanism for wireless charging the pen using NFC Wireless Charging (WLC 2.0), which can transfer up to 1W (a stylus doesn’t require much).

The tilt detection has also been improved in the current version. However, it’s unclear which version of the USI standard the Google tablet will employ. Details like this will most likely have to wait until next year.

Google’s upcoming Pixel Tablet that’s slated to launch in 2023 might have USI stylus support, but will that be enough to take on the iPad? The last Android tablet from Google was the Pixel C and it was announced back in September 2015. Prior to that, Google had announced a number of Nexus-branded tablets.

Among them were the ASUS-made Nexus 7 and Nexus 7 (2013), the 2012 Nexus 10 made by Samsung, and the 2014 Nexus 9 which was manufactured by HTC. After taking a break from making tablets for a few years, Google launched the Pixel Slate. However, unlike its previous tablets, it ran Chrome OS instead of Android.

Based on recent findings, the Pixel Tablet might be the first Google tablet with support for a stylus. A certification page for the Universal Stylus Initiative (USI) lists a Google tablet with the product name “Tangor”. The listing was first spotted by NuGiz and the device is believed to be the Pixel Tablet. If this turns out to be accurate, the Google tablet will be compatible with the multitude of USI styluses out there. Because Google is a member of the USI, it’s only natural that its first tablet in five years supports the standard.

The Pixel Tablet Will Have A Stylus Advantage

Google adding stylus support to its next tablet will make it appeal to those who are in search of an alternative to Apple’s iPad which has its own stylus called the Apple Pencil. Furthermore, while Google is no doubt late to the party, it will have an advantage over Apple and even other Android tablets with a stylus such as the Galaxy Tab S8.

The Pixel Tablet will be able to work with any USI stylus, regardless of the manufacturer, because it supports the USI standard. From CTL’s $30 stylus to the $65 Logitech Pen, folks can pick up any USI stylus of their choice based on their needs, rather than being tied to the one from the tablet manufacturer.

Google adding stylus support to its tablet is also timely. In 2021, it launched its own handwriting app called Cursive which came pre-installed with the HP Chromebook x2 11. After being limited to HP’s tablet for a while, Google has now made it available to other Chromebooks that support USI. It’ll only be a matter of time before Cursive is available as an Android app if Google releases an Android tablet with stylus support. There is even a likelihood of it coming pre-installed with the Pixel Tablet.

The Pixel Tablet will need more than stylus support to usurp the iPad’s control of the tablet market, with the most important part being the overall software as well as apps that can make the best use of the large screen estate. With the release of Android 12L, Google has already begun to address this issue, and Android 13 is expected to further improve the experience on the upcoming Pixel Tablet.

Police Said 4 Individuals Were Killed In A Hospital Shooting In Tulsa, Oklahoma