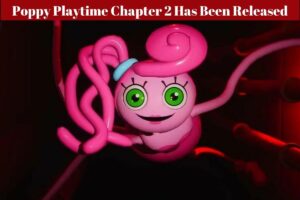 This is the second chapter of Poppy Playtime, an indie horror game. May 5, 2022, was when the game was first made available on Steam.
In the aftermath of Chapter 1: A Tight Squeeze, Poppy Playtime is freed from her case by The Player. Finding a way out of the factory using new equipment and evading Mommy Long Legs is the new objective for the Player.

As you look for a way out of the factory now that Poppy is free, things start to shift quickly. More toy factories await you in this three-fold expansion of Chapter 1. Brutal toys and mind-numbing challenges await. Swing and grapple your way out of harm’s way. Don’t let Mommy find you when you are escaping.”

In reaction to the player’s rescue, Poppy chooses to help The Player escape through the Game Station, which is hidden deep under the facility. After Mommy Long Legs assaults and takes Poppy, prompting The Player to descend to save her, this plot is quickly scuttled. Mommy Long Legs tells The Player that in order to get out of the station, The Player needs to play three increasingly harder games.

In the first game, Musical Memory, The Player is required to press the appropriate buttons. Until the game breaks down and an emergency halt is required, this will increase in speed gradually. Afterward, the Player is confronted with. However, Poppy, impressed by our quickness and intellect, decided that we were ‘too perfect to lose’ and adjusted the train’s course at the last minute.

As a result, Poppy claims that she and The Player can “make things right” because they’ve had “much time to ponder and contemplate.” But a jumbled static interrupts her before she can finish. Before Poppy can say anything more than ‘what-?’, the recording is abruptly cut off. Rapidly, the Train speeds. Using the emergency stop won’t make any difference. At some point, the train derails and crashes, but not before we see a sign that reads “Playcare.” After then, the chapter ends.

But if the player has the green GrabPack hand in their possession, and they already know the first two parts of the Train Code, they can essentially ‘cheat,’ since the final part is randomized and only requires trial and error in order to get the correct one. As long as the player correctly guesses the code, the chapter will end as normal. Despite not being rescued, Poppy will still deliver her end-of-chapter monologue.

Developed by MOB Games, Poppy Playtime is a horror-adventure video game. Last year, the first chapter was released on October 12, 2021, and the second was released on May 6, 2022.

An ex-Playtime Co. employee receives a mystery message and sets out in search of the abandoned facility where the company’s employees mysteriously vanished more than a decade ago. A collection of Playtime Co.’s botched science experiments in the shape of malevolent living toys and their subsequent consequences can be found here.

Although the game is often scary and creepy, it is also immensely enjoyable, and engrossing, and will keep your heart racing throughout the entire experience! Take part in a high-speed chase.

Fly in a Web 2, the sequel to the well-received game was released on May 5, 2022. The second chapter of Poppy Playtime costs $9.99, which is twice as much as the first, but it’s a great deal if you enjoyed the first. It’s an interesting decision by the developers to raise the price.

Poppy Playtime Chapter 3 is scheduled to be released in 2023, according to current information. The exact date hasn’t been determined, although it is believed to be early in 2023. Any fan should expect delays even if everything goes according to plan. Particularly in light of the upcoming movie version of MOB Games Studio’s renowned game.

There are already two chapters of Poppy Playtime: Chapter 1 and Chapter 2 for PC gamers. As a result, both chapters are now available for free download on Steam. There is now a $4.99 (formerly $9.99) price for Chapter 2, but Chapter 1 is now free to play.

Poppy Playtime Chapter 1 was released on mobile devices on March 11, 2022, five months after the PC version. Chapter 2 will be available for mobile devices in October, but it hasn’t been released yet. The mobile version of Poppy Playtime: Chapter 2 could be out any time now. Fans, on the other hand, are anxiously awaiting the publication of the third installment. I’d love to see even more riddles solved in Chapter 3 because the previous chapter left us with more questions than answers, so that would be ideal.