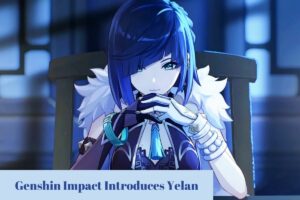 The wait is now over, as Yelan, the mysterious proprietor of the Yanshang Teahouse, has been presented in Genshin Impact. The only question now is if you’re bold enough to accompany Yelan and his gang into the perilous depths of The Chasm. Yelan is a five-star Hydro support character that wields her bow with unwavering determination and enigmatic efficacy.

Her Elemental Skill traps adversaries for easy pickings, and her Burst deals massive Hydro DMG and elemental damage. Because of her distinct strengths and adaptable playstyle, Yelan may fit into a broad range of teams, but you’ll need to first equip her with the correct tools for the job. This step-by-step guide will help you get started.

Sharpshooter’s Oath is one of the three-star bows that perform admirably on Yelan. The only aspect of her kit that scales with ATK is her Normal Attacks (and her Charged Shots that aren’t Breakthrough Barbs), therefore the lower Base ATK of three-star weapons isn’t a big deal.

As a result of their secondary stats, numerous three-star bows are excellent budget options for Yelan: Sharpshooter’s Oath, despite its low rarity, gives a significant amount of Crit DMG, and Recurve Bow will raise Yelan’s HP (on which practically all of her damage is based), and Raven Bow can be useful against Elemental Reaction-focused teams. These weapons are undoubtedly inferior to their higher-rarity equivalents, but they shouldn’t be completely discounted, especially by younger adventurers.

Because Yelan has a hard time recharging her Elemental Burst on her own, Favonius Warbow is highly effective on her. It provides a significant quantity of Energy Recharge, as well as a passive that regenerates Energy for Yelan. This bow will virtually single-handedly solve Yelan’s Energy problems, allowing you to use her Burst whenever the situation calls for it.

The event-exclusive bow, Fading Twilight, will be available for the duration of the Perilous Trail event. While its full potential has yet to be discovered, Fading Twilight and its Refinement ingredients will be provided free of charge to all players who participate in the event, making it an appealing alternative. On paper, it also has Energy Recharge and a damage-increasing passive, which both complement Yelan nicely.

The high Base ATK stats of five-star bows provide minor benefit to Yelan, but her signature weapon, Aqua Simulacra, is still great on her. It offers a massive amount of Crit DMG, as well as an HP boost and increased overall damage. This bow will make any of Liyue’s opponents think twice about crossing Yelan.

Emblem of Severed Fate works nicely on Yelan, which should come as no surprise. Her Energy difficulties are helped by the two-piece effect, and her Elemental Burst’s damage output is greatly increased by the four-piece effect. This is an excellent Artifact set to equip several of Genshin Impact’s other supports, such as Xingqiu and Xiangling, making farming its Domain much more effective.

Yelan can utilize two pieces of Tenacity of the Millelith coupled with two pieces of Heart of Depth instead of four pieces of Emblem of Severed Fate. This will give Yelan a 20% boost in her HP and a 15% boost in all of her Hydro DMG. This won’t solve her Energy problem, and her Burst won’t be as powerful, but you’ll get more powerful Breakthrough Barb shots and better Elemental Skill damage in exchange. Not to mention, having greater HP may allow you to survive a few more encounters than usual.

Yelan is damage-oriented support whose destructive power scales with her health, resulting in a somewhat unusual Artifact stat distribution. Target HP percent/Energy Recharge Sands, Hydro DMG Bonus Goblets, and Crit Rate/DMG Circlets for Yelan. Although HP percent Sands will provide Yelan with more damage and survivability, ER Sands may be useful for recharging her Burst, especially if you aren’t using a weapon that has ER.

If you want to maximize Yelan’s potential, Hydro DMG Bonus Goblets are the way to go. Finally, give Yelan a Crit Rate or Crit DMG Circlet to attain the ideal ratio of 1% Crit Rate to 2% Crit DMG.

Will Yelan Be Playable

In Genshin Impact Version 2.7, Yelan is a playable character. Yelan’s voice actor, release date, tale, Laura Post, Aya Endo, trailer, teaser, affiliation, story, voice lines, Character Lore, splash image, and profile are all included on this page. Yelan is a Tianquan Ningguang special intelligence officer who reports directly to him. Despite the fact that the title isn’t exactly accurate, it does cover the extent of her work.